On Wednesday, we had a different day to usual…

Our morning started off with circle time. Circle time is new and we’ll be doing it every week. This time will be for the class to sit calmly and reflect on the week and share any thoughts or worries. Year 4 did fantastic during their first circle time. The children showed good listening and gave helpful advice to each other.

We then kept the tables to the edges of the classroom to have a debate! This debate was to decide which Ancient Greek city state was the best – Athens or Sparta. The children had already learned about both city states so were ready with the best information to argue their case! They countered each other’s arguments about government, equality, war and trade. It was fantastic! 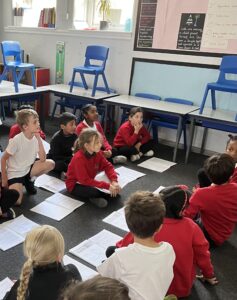 Sparta won but both sides explained their points thoroughly and respectfully to one another. Success!

Research other Ancient Greek city states at home and find out which one was the fairest of them all.