This half term, our Science topic is called ‘What’s that sound?’.  We are physicists because we are learning about physics.

So far, Year 4 have learnt how a sound travels into our ears and that is because of vibrations. For example, if an object like a car door is slammed shut, the car door vibrates and the vibrations travel through the air to our ears!  To find out more, we went on a sound walk around the school to find as many different sound sources as possible.

The children heard lots of things, such as;

We worked out that we heard most of the sounds in the front playground due to being nearer the road.

Our second lesson was exploring sounds further and fortunately for the children, making sounds with our bodies! We tried to compose a “song” using our bodies. We clicked, stomped, hummed, thumped and shouted. We then experimented with the drums by placing rice on the top and seeing what happened when we hit it hard and hit it softly. In conclusion, the harder we hit the drum, the higher the rice flew and the softer we hit the drum, the lower the rice flew.

Have a look at us in action: 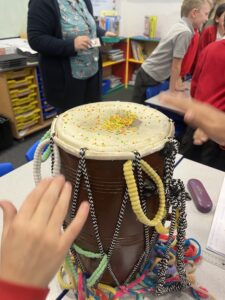 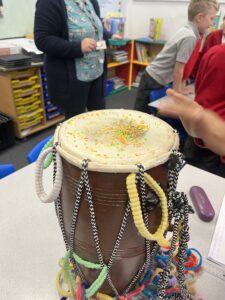