For the next two weeks, we will be focusing all of our ‘spelling energy’ on some tricky suffixes. To help us practise choosing the correct suffix, children should complete the worksheet they have been given. This should be completed by Thursday 04 May. 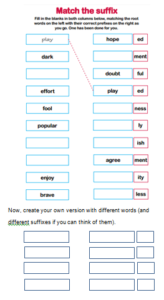 “i before e except after c!”

Many of us have heard this rule but just how true is it? Children should investigate this ‘rule’ and find out how true it is. Are there many exceptions? Can you find examples where the rule does help? Children should evidence their investigation on the spelling page of their homework book.

This week, in preparation for an end of term spelling test next week, children have been given a copy of the Year 5/6 statutory word list (taken from the Primary National Curriculum).

Children should practise spelling these words as they are likely to be tested on similar words during the test.

Children know lots of ways to practise their spellings so they should choose a method that they think will work for them. One way to get yourself involved would be to say a sentence with the word and ask children to spell the word correctly. It is important that children know how to use the words and not just how to spell them.

Double up for a short vowel sound

This week, we have focussed on a spelling rule that we have previously learned but still make mistakes with.

The ‘double up for a short vowel’ sound is very common in the English language although, as we have found, there are exceptions to the rule.

Here are a list of words that double up for a short vowel sound. You should familiarise yourself with the rule and learn how to spell these words. You will be tested on ten of these words on Friday 03 March.

This year, we’ve already had a two-week spelling focus on ‘homophones’ (words that sound the same but are spelled differently and have different meanings). However, because homophones can be really confusing we’ll be practising (or should it be practicing?) these words again. Also, as a class, we often choose the wrong homophone in our writing.

For this week’s spelling activity, children should choose three homophones. They could choose homophones that they know they often get wrong, ones they find tricky or words that we have not focussed on yet this year.

For each homophone they should do the following:

*Disclaimer: any incorrect uses of homophones throughout this post are intentional.