This week there are no new spellings. The spellings sent last week will be tested on Friday 23 June. Keep learning those spellings using these activities.

Are there any silly rhymes, sayings, or ways of saying the word that will help you remember the tricky bits?

Can you spot any spelling rules that we have learnt in your spellings? For example: Double the consonant.

Write your spellings out in lots of different colours. You could even change the colour for each letter.

This week’s spellings have been chosen from the Year 3 and 4 word list. These spellings are often spelled incorrectly by many children. Learn the spellings for a test on Friday 23 June. 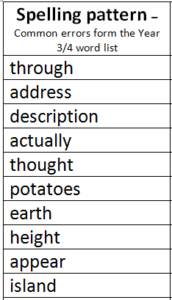 This week’s spellings end in -ation -ative and -ly. Learn the spellings for a test on Friday 02 June. Remember to use the spelling strategies at the front of your homework book. 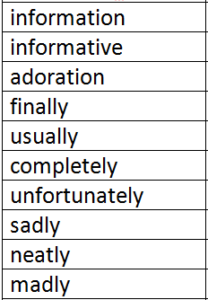 This week, the children have been given three spelling activities. They need to use these to help them to learn the words given last week.

Write your spellings as ‘stair steps’.

This weeks spellings follow the rule ‘ou‘ making the short /u/ sound (sounds like the ‘uh’ in ‘cut’ and ‘shut’). Use the spelling activities from your homework book to learn these spellings. The spellings will be tested on Friday 19 May. 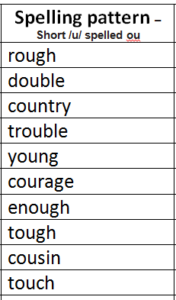 This week’s spellings to learn for a test on Friday 31 March.

This week, the children have been given a spelling activity on a worksheet. This will help them learn their spellings from the list given last week. The spellings will be tested next week on Friday 24 March.

The spellings to learn this week are all homophones… words that sound the same but mean different things. As well as the spelling, children need to know the meaning of each word. When I test the children on these spellings, I’ll give them the word in a sentence. For example – There was a pretty, pink flower growing in my garden.

This week, the children have been given a spelling activity on a worksheet. This will help them learn their spellings from the list given last week. The spellings will be tested next week on Friday 10 March.