The week’s spellings are all singular and plural possessives. We’ve been looking at the role of apostrophes in the contracted form (can’t…don’t…won’t) and have started to look at how they are used to mark possession (the cat’s pyjamas are the pyjamas that belong to the cat).

For this spelling list we’re focussing on using ‘s for singular nouns (one cat’s pyjamas) and s’ for plural nouns (two cats’ pyjamas).

This week, we are our continuing our spelling focus on homophones. Why not try illustrating this week’s homophones to make them more memorable? See below for some ideas. 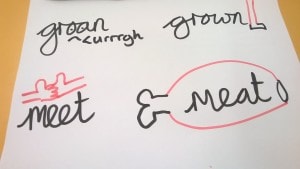 groan: a sound of despair
grown: to have increased in size

main: the most important
mane: the long neck hair of some animals

meat: the flesh of an animal (which some people choose to eat)
meet: to be in the same place as someone else at the same time (in the word, the two e letters meet up)

This week’s spelling are all homophones. Homophones are words that sound the same but have different meanings and spellings e.g. new and knew. I’ve included some rough definitions as a guide. You might want to chat about other meanings with your child. For example, the word brake could be used as a noun (the brake of a car) and as a verb (I’m driving too fast so I’m going to brake).

This week, the spellings are all contractions.

An apostrophe represents missing letters in a contraction, which is when a word or words are shortened by omitting letters. There are about 100 common contractions! Be sure that your child knows the contracted and the expanded version:

There are no homework tasks or spellings during the holiday period.

Instead, support your child in other ways. Make sure they take part in family events, encourage them to relax and catch up on some reading at home, encourage them to send thank you notes (emails are fine, too!) – all these things will help their English skills of speaking and listening, reading and writing.

Plenty of maths skills can be practised, too – planning some top telly and considering times and durations of programmes, working out what half price is when the sales start… could your child even help with some cooking to use various measures?

Whatever they do, make sure your child, and you, have a happy and healthy Christmas break.

This week’s spellings link to measurements which will be our maths focus next week. Your child will need to know the spellings and the appropriate abbreviations.

This week’s spellings are linked to our learning of dialogue in English:

These verbs are in their infinitive form and so have ‘to’ in front of them – we’ve been learning them like this in class.

‘To speak’ is highlighted to indicate that it is our root word study. A word study encourages us to think about how words are created using prefixes and suffixes. Check out the photo below to help your child’s learning.

Your child will be tested on the five spellings given and three others from the word study shown here.

This week, the children need to be preparing for next Friday’s sponsored Spellathon. Your child needs to revise a list of 40 spellings. These 40 spellings are not brand new; they’re from the spellings which they’ve learned throughout the year so far:

Any child who scores 40 will take part in a spell-off to deem the ultimate speller!

This week’s spellings not only link to an important spelling rule (drop the e for ing), but also link to our health themed week beginning on Monday 23 November:

We’ll use all of these words during our themed learning next week, so make sure your child is in the know about how to spell them correctly!

This week’s spellings follow on from the previous week and so follow the same rule: drop the y for an i.

Which word is the odd one out in this week’s list?