This is Year 4 Class News

In our Living and Learning lesson this week, we were talking about our relationships with family and friends and what makes them special.

We also discussed how it can be difficult when something in our lives changes meaning that we can’t see loved ones as regularly. This resonated with the class as, due to lock down and tiers, we’re all being affected by this.

We talked about and made a list of different things we can do to show family and friends that we care about them and are thinking about them even though we may not be able to see them. We hope you find them useful!

How to show loved ones we’re still thinking of them:

We really appreciate your patience regarding school dinners and the choices we have been able to provide.  We’ve been very conscious that changes needed to be made and a hot dinner offered wherever possible.  Over the next few weeks, we’re going to trial a menu on a two week rota and if this is successful, then it will be carried on after the school holiday and reviewed again.
There are two options each day, a vegetarian and a meat option but there is one day a week which is ‘meat free’.
We’re not in a position to resume ‘normal dinners’ but this is a step in the right direction. Click here to see the new menu and we encourage you to discuss and share the options with your children.
We are also able to offer a Christmas dinner option on Thursday 10th December. Please inform the office if your child would like a school meal on this day. 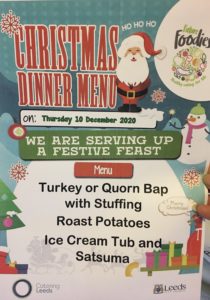 History: interpretations of the past

In our history learning today, we used our knowledge about the Athenian and Spartan city states to decide which one was the best!

We split into two teams to debate and within our teams split into little sub-groups responsible for debating one aspect of life in the city states.

The class did a great job at debating. They took turns well, made pertinent points, responded to opposing points and summarised. They also used openers to introduce their points and were respectful debaters throughout!

So, who was the best city state? Well, the debate was close. Athens won the categories on government and economy but Sparta won education and role of women. Tomorrow, we’ll make final points and I’ll make a decision on the winner!

In our Living and Learning lesson today, we were talking about strong emotions and some strategies to cope with them. We decided that talking about how we were feeling was a really good way of solving a problem or feeling better about something that may be troubling us.

We then watched a BBC education video about someone who joins a new school and is desperate to make friends and fit in and ultimately makes a bad choice in order to fit in with a group of people. We discussed the emotions that the person could have been feeling and how that influenced his choices. We also discussed what they could have done differently and how they eventually solved the problems.

We know you are missing attending after-school clubs at the moment, whether it is in school or out of school, so here is some information about a virtual after-school club that can be done at home.

The Youth Sport Trust have taken the step to deliver a free virtual after school club as part of a national response to the second lockdown. The 30-minute club will take place at 5pm each weekday and be led by a different member of the YST’s athlete mentor network. These will run until 18 December.

Aimed mainly at primary-aged children, a different theme has been assigned for each day of the club – Adventure Monday, Tuesday Play, Wild Wednesday, Thinking Thursday and Fun Friday.

Watch this video showing the class progress in Times Table Rock Stars from Y3 to Y4. You can view your own child’s progress when they login. There’s some amazing improvements!

In today’s lesson, we’ve been learning about Athenian democracy.

We learnt that most Greek city states were ruled by one person (monarchy – a king, queen or emperor) or a small group of powerful men (an oligarchy). An Athenian Tyler, Solon, introduces democracy to Athens around 500BC which gave any citizen the opportunity to vote on new laws.

However, only men who were born in Athens were classed as citizens. Women could not vote!

Living and Learning: United against bullying

This week, it’s Anti-Bullying Week and the theme for this year is ‘United against bullying’.

STOP is a key message linked to bullying. In our school, STOP stands for two things:

Recently, our school council met to review our school definition of bullying and our child friendly anti-bullying policy. Thank you to the school councillors for their valued contributions. As a result, our definition and policy have now been updated.

In our school, this is what bullying means:

Bullying is where you hurt someone, physically or emotionally (including online), several times on purpose.

If any of these things happen several (lots of) times, it is bullying.

This could be in person or online (cyber bullying) and could be because of someone’s race, disability, gender, appearance, age or any other protected characteristic.

What could you do if you are being bullied?

Who could you tell?

Our views on bullying

We’ve been learning about similes this morning in our writing lesson.

We used an app called Padlet to collate our similes. We then read them as a class and edited them if they needed correcting or improving.

“The red panda moved as quick as lightning to save its adorable cub.”

“The newly washed clothes were as soft as silk.”

In yesterday’s history lesson, we learned about the Battle of Thermopylae – a famous battle between the Ancient Greeks and the Persians.

We learned about a Greek historian who wrote about the battle and about the weapons and armour that the Greek soldiers would have had.

We then became military commanders to show the events of the battle.